Through the Round Window 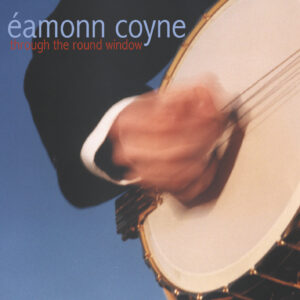 TTRW, Éamonn’s first solo cd, through the round window, on Compass Records, was released in the US on 13th August. It is a work of banjo music and more featuring Éamonn on tenor banjo, mandolin, tenor guitar, 6-string guitar and tenor national steel guitar.

Accompanying him on the cd are a host of luminaries of the Irish music scene and beyond including: Alison Brown, 5-string banjo astronaut from California, Dermot Byrne and Ciarán Curran of Altan, Kevin Doherty of Four Men and a Dog, Michael McGoldrick of Capercaille and Mark Knoffler’s band, Tom Morrow of Dervish and Ethna Coyne (nano) his grandmother.

Other guests on Through the Round Window are: Kendrick Freeman, from California on snare, Jimmy Higgins of Galway also on snare drum, Russell Hunter of Edinburgh on piano, Pat Marsh from Clare on bouzouki and guitar, Paul O’Driscoll of Clare on bass and Sandy Wright from Edinburgh on guitars and dobro.

This is what Compass Records wrote about the CD in 2002:

‘Through the Round Window’, the solo debut of renowned tenor banjo player Éamonn Coyne, is a rare achievement.  Using his masterful technique as a foundation, Coyne builds a musical bridge between the traditional Irish sounds of his upbringing and his other, more international influences.  The high esteem Coyne commands in Irish music circles is reflected in the clarity, precision, and impeccable timing of each note he plays.  Wherever his vast musical imagination takes him, the power and resonance of his ingrained heritage shines through.  The result is a remarkable album that explores new terrain for the Irish tenor banjo while radiating the warmth and integrity of a centuries-old musical lineage.

“Over the years,” Coyne explains, “I have been lucky enough to experience lots of different types of music.  I wanted to record a CD to explore some of these influences on my playing. ‘Through the Round Window’ comes from the music of these different sources passing from me through the main instrument I play, the Irish tenor banjo ­ whether it be Donegal fiddle music, Irish box and flute playing, or old-timey American fiddle and banjo tunes.”

Channeling Coyne’s eclectic tastes through his own virtuosity on the tenor banjo lends ‘Through the Round Window’ a freshness that never sounds incongruent ­ even at its most far-reaching.  On the more traditional side are “Whistling Reels”, a set recorded with flautist Michael McGoldrick, “Mazurka & Jigs”, which combines a Donegal-styled mazurka with a pair of jigs, and the languid “Tommy & Jerry”, which ingeniously blends tunes from Tommy Peoples and two CapeBreton tunes from Jerry Holland.

Careful sequencing allows ‘Through the Round Window’ to unfold gracefully, the more adventurous excursions beautifully balanced by the invigoratingly executed traditional fare.  One of the threads unifying ‘Through the Round Window’ is the interrelation between different cultures.  Nowhere is that give-and-take better demonstrated than on “Nine String Susannah”, a trio of American old-time fiddle tunes played as a duet with Grammy-winning 5-string banjoist Alison Brown.  Kevin Doherty, of the acclaimed eclectic Celtic band Four Men and a Dog, contributes two original compositions that combine the soulfulness of classic balladry with a contemporary edge.

All of the performances on ‘Through the Round Window’ sparkle with empathy and audible camaraderie between the players.  “That’s because this CD has come together thanks to the great friends I have,” Éamonn Coyne says with a smile, “who happen to be musicians.”  That sound ­ of good friends, good taste, and good times ­ is what, more than anything, makes ‘Through the Round Window’ such a gem.

A few nice words about Through the Round Window

“Most of the tracks entail duo and trio play-offs among company, highlighting not only Coyne’s brilliantly ornamented, warmly laid-back style but also a rare empathy with other instruments and players.
…this is an infallibly tasteful album that enhances Coyne’s already considerable reputation.”
Sue Wilson
SUNDAY HERALD (Glasgow)

“…this album comes as no surprise either in its virtuosity or eclecticism.”
Siobhán Long
THE IRISH TIMES

“Banjo man Éamonn Coyne brews up a wonderful mix of musical influences from around the world on his superb album, ‘Through the Round Window’.”
Pat Ahern
IRISH EXAMINER

“‘Through The Round Window’ has already established itself as one of our all-time favourite banjo albums. Coyne’s easy-going style and great sense of musical direction have propelled him into the spotlight and it's likely he’ll stay there for some time.”
PAY THE RECKONING
October 2002

“Coyne plays the tunes - the reels, the mazurkas, the jigs - for the melodies, not to show off his instrumental virtuosity. He’s got the respect for the traditional tunes that’s the hallmark of a good, mature musician, but he’s not slavishly devoted to reproducing every wheeze and nuance of some traditional interpretation.”
Reid Mitchell
ROCKZILLAWORLD

“Éamonn Coyne might live in Edinburgh, but this lad’s home is in Irish music at its world best.
…he reveals how stylistically varied and tasteful he and his beloved Irish-built instrument can be.”
Norman Chalmers
SCOTLAND ON SUNDAY

“Coyne is a nimble, precise player with an enjoyably swinging style…Let’s hope we hear more from him again soon.”
Sarah McQuaid
HOT PRESS

“The wonderful tenor banjoist Éamonn Coyne, whose solo debut is a willfully eclectic assortment of tunes and styles that will simultaneously thrill and baffle traditionalists…Coyne’s unique talent is not so much his impressive banjo playing as it is his ability to pay homage to so many different musical influences and, by doing so, to make an album that hangs together so beautifully.”
Rick Anderson
AMG REVIEW

“In the hands of Dublin-native Éamonn Coyne, the tenor banjo becomes a fabulously expressive voice for a wealth of music…At every turn, Coyne’s tasteful, melodic and precise playing brings a fresh spirit to the music…If you consider yourself part of the anti-banjo league, pick up this buried treasure and get converted.”
Sandy MacDonald
HALIFAX DAILY NEWS, Canada

“…a musican on the rise.”
Rob Adams
THE HERALD, Glasgow