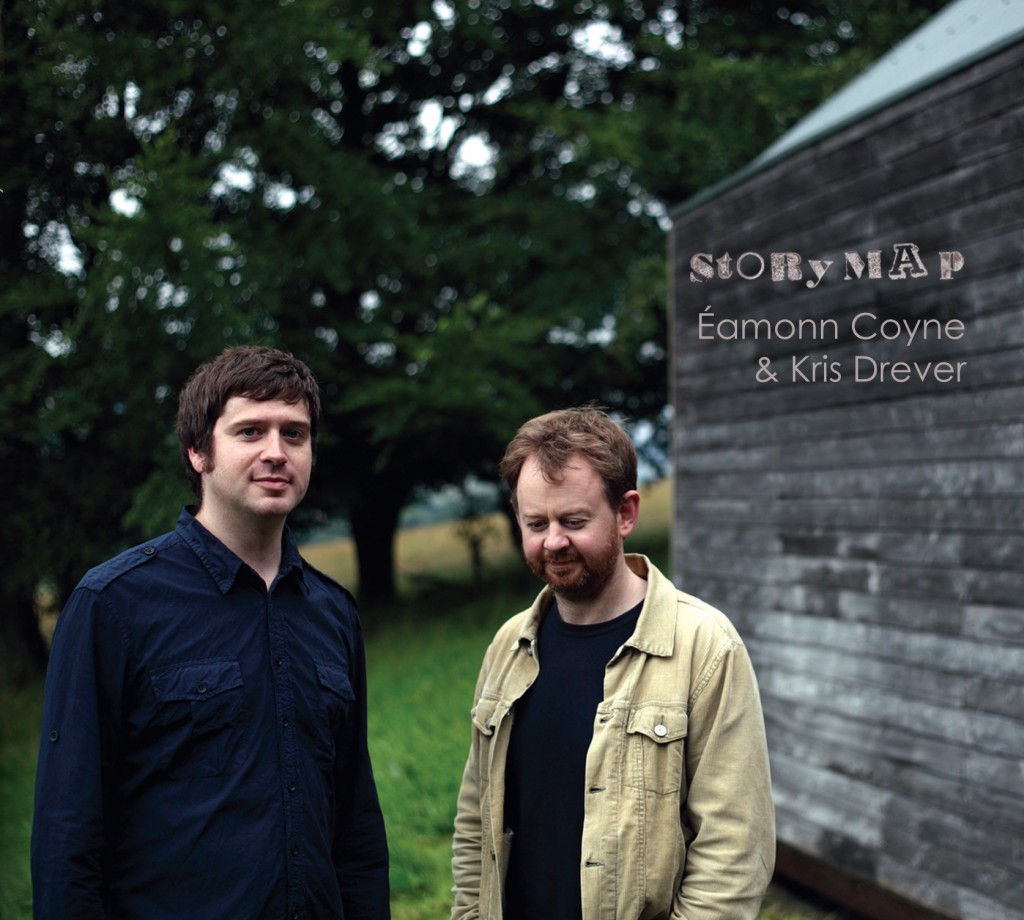 As always we had help with this one too from:

This is what we wrote about the various tracks on the ‘Storymap’ album:

Two reels: “Ceapaval” (also known as “The Harris Dance”) & Liz Carroll’s “The Leading Role”. Kris got the first one from the marvellous fiddler Anna Wendy Stevenson. The second one we both know but we know not from where. These came from just playing a couple of tunes together before a gig and Kris asking me did I play them. I didn’t know I knew them until I tried and a new set for the gig happened over time. The first is a Scottish tune and the second is a tune from the great Irish fiddle player and composer Liz Carroll from Chicago – she plays it in a different key though; another common feature of our duo playing is changing keys of tunes to suit us.

This song was collected by the Orkney Song Project. The story goes that as the whalers left Stromness (after stocking up on water), the pubs of the town would empty and the drinkers would fill the bay with this song as they waved goodbye to their visitors. Kris played this for me and I loved it; I also have a strong Orkney connection and know the place pretty well. I could well imagine the story.

“72nd Highlanders Farewell to Aberdeen”, “After the Battle of Aughrim”, “Siskin”, “Miss Ramsay’s” – a march from Scotland, one from Ireland, a reel from the playing of Birmingham banjo player, Joe Molloy, and one widely played in Donegal. This set features some great playing from the wonderful Simon Bradley who arrived at the 11th hour to share his skills. I have been playing the last three of these tunes for many years but never as a set. Kris and me played the first of these with Dougie MacLean for Perthshire Amber festival last year and really liked it. We put it with the 2nd one which is a great Irish March, then came the 3rd which as I say above I learned from a banjo player who had a huge affect on my music when I first heard him in 1986. The fourth is a tune that I learnt in Donegal that has been the other great influence on my music.

The lovely “Mickey Finn’s” air which Kris got from Freddy Thompson and Luke Plumb followed by Kris’ own “The Goat Walk”, into a version of ”Abe’s Retreat: – an old‐time American fiddle tune commemorating Lincoln’s retreat at the Battle of Bull Run. Kris has been playing the first of these for years and I got it from him. He wrote the second one, and it synthesized into this version over a while of playing it – in part due to the fact that it suited the banjo better that way! The name comes from a gig we did in Topsham this year: when we went for a wander about the town we came across a lane/path called “The Goat Walk” and we have some silly photos of each of us (but probably of me in particular) with our heads obscuring the word “Walk”. We got the last tune from the playing of Clare fiddle player Tola Custy and even though it is from the American old‐timey fiddle playing tradition, it is also known in English folk music.

We love this song and the many versions of it that exist. It’s set in what is now known as Mauritius. Kris played this for me one night on the drive back home from a gig. Some of the music we play often comes from these drives and the phone recordings we make to remind us of tunes that pop into our heads at 2 (etc.) in the morning. I loved the song; he played me a version by Susan McKeown even though I had originally heard it from Nic Jones. I get to play some electric‐guitar‐style‐tremelo tenor guitar on this track that Kris has dragged me into, with much patience from him, as I am not renowned for that type of playing being predominantly a banjo player! I love it now though and am learning all the time. Sometimes I listen to it and wonder is that really is me playing!

Éamonn got this from the playing of Siobhán & Tommy Peoples but obviously not note‐for‐note!! The tune, originally believed to be a mish‐mash of many tunes, is one which at the turn of the century Irish‐ American dancer Kitty O’Neil used as her party piece. It has seven parts; we’ve played it through twice here. The first time is the map and the second is the story. A tune I know for a lot of years from the playing of Tommy Peoples and which I played with his daughter Siobhán for a long time. Kris suggested it at some stage asking me did I know it and it was instantly on the list. As we say above it got the ‘Storymap’ treatment – setting up the tune the first time through and then adding the texture and influences which are part of our (and often the people we choose to play with us) musical identities. It moves the tune from one place to somewhere completely different even though the dots are still the same.

Éamonn heard the Moving Hearts instrumental version of this close RTÉ Radio 2 each night for many years in the 80’s at 01:50 am (when he should have been asleep). Kris got the song version from the singing of Dolores Keane from Galwayvia Chris Sherburn & Denny Bartley. When I first started listening to the radio in bed at night when I was growing up – I got a small one for Christmas one year – this appeared every night to close the station I commonly listened to (RTÉ Radio 2; one of the two national radio stations) in the form of the Moving Hearts instrumental. I also knew it from the great version Galway singer Dolores Keane sang accompanied by Máirtín O’Connor on button accordion bass drone. Again, I get to do the electric‐guitar‐style‐tremelo tenor guitar and I can’t say how much I love it!! I love this track too; it invokes all kinds of images of the disappearance of loved ones from rural West of Ireland where I am originally from.

“La Bestia”, “The Lass o’ Gowrie” and “Pot Luck Dinner”. Two tunes learned ‘osmotically’, and one from the great Cahalen Morrison. Kris found ‘La Bestia’ and I was instantly drawn to it; as was the case for the second. The third comes from a duo of musicians who sound like they have a similar connection to Kris and myself: Cahalen Morrison and Eli West from Portland. This is a Cahalen tune and it is totally addictive. We play this set totally on guitars – six string and tenor – and it has become a nice treat in the duo set up possibly for the listener as well!

Ed Reavey’s “Both Meat and Drink”, a Paddy Fahey jig, “Rocking the Cradle” and finishing with a ‘jig’ with a few titles including “Sweet Marie”, “Julie’s Jig” and “Parnell’s March” – Éamonn probably got this last tune from the playing of the great Kilfenora Céilí Band. Two tunes introduced by Kris and the second and last by me. We play these like we have played them together for years but the truth is that we hadn’t played them together that much before we recorded them. It is simply our growing as a duo over the years that has allowed such tightness of playing even with new material. We often surprise ourselves with the ornamentation playing in the tunes (triplets etc.) and the tightness this invokes – indeed this is a common factor in much duo playing that we admire – but it often comes with such ease as to be quite scary at times! We first noticed it when recording ‘Honk Toot Suite’. The name of the track came from the recording engineer’s (Mattie Foulds) sing along comment when listening to a playback.

What Reveal Records say about Storymap:

If you’re a big music fan, you’ve probably already caught Kris Drever as part of the acclaimed group Lau, perhaps on that trio’s recent TV performances on Later…With Jools Holland (BBC 2 TV), Edinburgh’s Hogmanay (BBC 1 TV News), BBC Folk Awards (BBC Red Button TV / iPlayer), or on stage during their sold‐out London mini‐festival Welcome To Lau‐Land or at a gig on their national UK tour of 2012. You may well also have seen and heard Éamonn Coyne with the equally captivating and critically lauded Treacherous Orchestra (whose album Origins’ came out last year) or with Salsa Celtica.

“Our playing on ‘Storymap’ is often quite symbiotic” says Éamonn, “as is the way we go about choosing and arranging the music in the first place. Often traditional in origin we make the tunes our own and we hop from idea to idea, which often arrive almost fully formed, with relative ease. It is not complicated music or arranging of course but we love its simplicity and that is one of the attractions.

“One source of the title ‘Storymap’ comes from the different ideas and origins of the tunes; like having an idea and then filling in the pieces – “lets play a couple of Marches with a couple of Reels” etc. It also comes from (without trying to be over analytical or prosaic) the continuing journey Kris and I are on in our music together. We have an idea what the album should sound like based on the music and arrangements and then go for it and see if it still fits that idea. ‘Storymap’ is a continuation of the loose vibe we created and enjoyed on ‘Honk Toot Suite’. The next story is always just around the corner and that is also what the title and the music of ‘Storymap’ is also saying – it is just another album in the bigger picture. We don’t intend to stop there.”